Interstate 90 (I-90) is the longest Interstate Highway in the United States at 3,101.13 miles (4,990.78 km). It is partially the northernmost coast-to-coast interstate, and parallels US 20 for the most part. Its western terminus is in Seattle, Washington and its eastern terminus is in Boston, Massachusetts.

Construction on the Lacey V. Murrow Memorial Bridge began January 1, 1939 and was completed in 1940. It sank in a storm on November 25, 1990, while it was undergoing refurbishing and repair. See video below.

Repairing it was no easy task: The sinking pontoons had pulled more than a half-mile of highway into the lake with them, and the structure needed to be rebuilt from scratch. This project took three years and cost $93 million. When the bridge finally reopened, it closed one of the last remaining gaps in the interstate highway system: a person could drive from Boston to Seattle without ever leaving I-90. 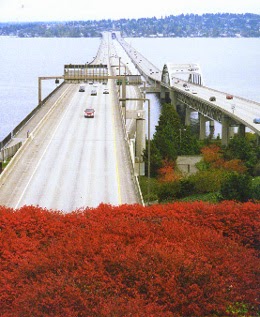 On September 12, 1993, the rebuilt Lacey V. Murrow Bridge opened, replacing the original Murrow Bridge, the first floating concrete bridge in the world. When the bridge opened in 1940, the Seattle Times called it "the biggest thing afloat." It was almost two miles long, contained 100,000 tons of steel, floated on more than 20 hollow concrete pontoons, and carried 5,000 cars each day. By 1989, its daily load was closer to 100,000 cars. As of 2008, a reported estimate of 148,000 motorists travel the road daily (en.wikipedia.org).

If it is man made, it is susceptible to error and destruction but can always be rebuilt or replaced in accordance with the day's advanced engineering and technological skills!
Posted by Unknown at 4:49 PM