A Pristine Side of Winter

Awaken inner thoughts of beauty and solitude even in the bleakness of Winter. Put your imagination to work with some new, rather unique, visions of Jack Frost. While it may be br-r-r-r cold outside, there is so much beauty to behold during the season of Winter. Yes, that's right! Don't be misled by visions of the drab, dreary, gloomy side of Winter but look around at the amazing sights that can only be encountered in the coldest season of the year.

Relish in the Winter spirit. The cold, crisp air refreshes the lungs with a quiet walk where the only sounds are the crunching of ice crystals underfoot. Listen to the wind-chimes as the North Wind sends a swift brush of cold through the air.  Examine every tree, shrub, plant and field as it displays its own uniqueness having been gently touched by nature's paintbrush of downy white.

You can find solace deep within yourself once you are lost in a daydream that explores the magical mysteries of Winter. Cleansing, refreshing, invigorating! Then, enjoying the warmth of a cozy fireplace after such an exhilarating experience invites a steaming hot cup of white chocolate cocoa spiked with a stick of cinnamon:)

Jack Frost invites you to experience the pristine side of Winter. . .
(Be sure to click the tiny square at the bottom right to watch the video in full screen view.)

January seems to be on the speed track as time moves right along at a pace much faster that we all probably would prefer. Yet, with the passing of time lies the anticipation of the natural elements of early spring. Glory in the springtime initiates countless visions: greening hills, warming sun, tulips, pansies and wildflowers popping! Nature in its own pristine beauty flourishes after winter's thaw; prickly, bristly thorns and spiny things emerge clothed in springtime's awe! 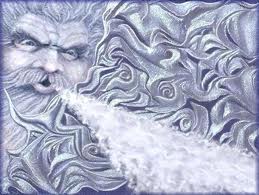 But, WAIT!! Am I being somewhat premature? The presence of old man winter is still felt, chilling to the bone. That is, of course, unless you are relaxing on the beaches of sunny California, along Florida's Emerald Coast, in the Florida Keys or perhaps cruising the turquoise waters of the Caribbean.   Ah-h-h-h! Beach blankets, lounging chairs, suntan oil, basking in the warmth of the sun, diving into cool waters–—enjoyment within an oasis of calm and relaxation!

Before even splashing our mental coloring books with the hues of springtime, we must endure winter’s final chill or last blanket of pure white, either Jack Frost or a dusting of snow. As Terri Guillemets once quoted, "The color of springtime is in the flowers, the color of winter is in the imagination."

So, let's put our imagination to work with some new, rather unique, visions of Jack Frost.

Jack Frost invites you into his lair. . .

While I did not join the million and a half plus in Times Square, rejoicing was still prevalent as family and friends gathered to exclaim the beginning of a New Year! Can't recall when I actually stayed awake until the magic midnight hour so this time definitely yielded a date to remember! Watching the crowds and crowds of people as they huddled to keep warm and inched their way along the sidewalks and city streets reminded me why I was here and NOT there.

The year 2011 brought sad times but managed to overshadow those times with some wonderful memories. As we venture into 2012, let us all remain hopeful of continuing prosperity as we unite with strength in God and our country.

Click the page link to the right, Good-bye Old, Hello New...
Posted by Unknown at 11:31 AM 0 comments