The Decade That Changed a Nation

We are in the midst of the three-day weekend honoring civil rights leader Martin Luther King, Jr. This was a man with a committed life during a period of enduring highs and unforgettable lows in American history. This was the 1960s—a time of social revolution where choices led to “tune in and drop out” or lead a normal life with focus on work, family and home. This was the era where women wanted to stand up and be counted—counted for more than just wife and homemaker—in other words, they were seeking equality with men. Good education. Good job. Good pay. 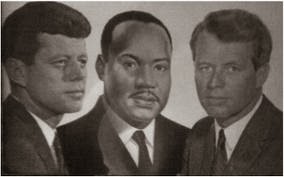 The music of the 60s echoed times of innocence and hope while at the same time radiated tones of anger and violence. The youngest president of our nation, John F. Kennedy, was elected, the first to be born in the 20th century, only to be assassinated in 1963 (Dallas, TX) before completing the tasks set before him by himself and others. Many felt the spirit of hope died. Martin Luther King, Jr's endeavors during an era of unfair treatment toward black citizens were halted but not stopped entirely with his murder in 1968 (Memphis, TN). Then, within only a matter of weeks, Senator Robert Kennedy—brother of John F. Kennedy—was shot and killed (Los Angeles, CA). At the time of his assassination, Robert Kennedy was campaigning to win his party’s nomination for President of the United States.

Within the last year of the 60s, what was once thought impossible happened: Man walked on the moon! It was July 20, 1969 when the spaceflight Apollo 11 landed on the moon. Six hours later on July 21, Americans Neil Armstrong and Buzz Aldrin were the first humans to set foot on the lunar surface. Thus began the 'moonwalk' later to be epitomized as dance in 1983 by Michael Jackson.

As a result of so much passion and turmoil in the 60s, music changed. Dissatisfaction with the nation, questioning of beliefs, inability to hold onto parents’ values led to rebellion—long hair and unusual styles in fashion. Songs of social protest engulfed the music scene many with anti-war themes long before the Vietnam War became a violent issue in the U.S.

Rock 'n' Roll music enveloped the world with lyrics embellished in protest. Most adults were against the new music but the younger generation jumped on board zealously and held on tight. It was the words as much as the music that was so important. Put in no plainer words are those of singer/songwriter Bob Dylan, "There would be no music without the words!"


In addition to songs of social protest, the most popular songs of the sixties came not from an American group, but British—The Beatles—four rock and roll musicians from Liverpool.


Other songs, including some by The Beatles, adapted themselves to the lives and times of the youth of this era. They sounded more revolutionary speaking about drugs and sex, but not necessarily openly.


"Do your own thing!" resonated throughout this decade. Nothing epitomizes this more than Woodstock (1969)—young peoples' rebellion against traditional values—and music by Jimi Hendricks, Joan Baez and groups such as The Who and Jefferson Airplane.


Not everyone rebelled. Not every one "tuned in and dropped out." Not everyone took part in Woodstock. Activists continued to fight for peace, racial and social justice. Women fought for equality.

Which of The Greatest Hits of 1969 is your favorite?