Music into the 21st Century

As we enter the 21st century, many songs from the 50s all the way through the 90s are still popular. Of course, it was by way of the 20s, 30s and 40s that music has evolved into a passion relative to survival as many listeners would so declare today.  Look at the plethora of choices available for listening pleasure, dancing, rapping, or simply relaxing: contemporary music, popular music, traditional music, hip hop music, country music. Each decade has offered its own unique genres of music.

Some say the culture of music entering the 21st century is on the decline. It is lacking creativity and substance with less emphasis being placed on melody and rhythm, instead it is all about showmanship. Who can outdo who with the most, or should I say the least, in presentation...Least in this case being reference to morality and clothing. Today's music is more about sexual arousal and the drugged mind than real talent and creative imagination.

To quote Bob Dylan "I don't know anybody who's made a record that sounds decent in the past 20 years, really. You listen to these modern records, they're atrocious, they have sound all over them. There's no definition of nothing, no vocal, no nothing, just like ... static...."

Listen to a little of early through mid-21st century music. Let the video speak for itself...


A history of the music of the 21st century starting in 2000 and working to mid-2008. This video shows the evolution of music and it's styles in a short period of time. Watch on YouTube or full screen for the song titles and recording artists.

With the coming of the new millennium, the music industry entered a crisis. The advent of digital downloading took quite a toll on single records and albums with sales tumbling within the first decade. Simultaneously, though, hip hop, aka rap music, solidified its standing as the dominant influence on global youth culture.

Pre- and into 21st century accolades... 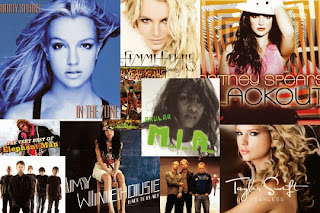 Taylor Swift's release of her debut album in 2006 established her as a country music star. Beyoncé, former lead singer of R&B girl-group Destiny's Child, was the first artist in twenty years, as well as first female artist in chart history, to have both an album and single debut on top of the UK and US charts at the same time. Lady Gaga was recognized for her flamboyant, diverse, and outré contributions to the music industry through her fashion, performances, and music videos. Christina Aguilera was established as a pop icon and has garnered honorific titles including the "Princess of Pop". Her fifth album incorporated elements of '30s and '40s blues, soul, and jazz music. Justin Timberlake mesmerized the world with not only his music but also his acting ability. He was bestowed titles of Sexiest Man and "Most Stylish Man in America."

Jennifer Lopez has explored various musical genres over the course of her career; this includes Latin pop, dance, R&B, hip hop, rock, funk, house and salsa among others.

While many “artists of a certain age” have struggled for relevance (and new ideas) in recent years, our very favorite Knight of the Turntable, Paul McCartney, has never had a problem delivering always the goods well into his seventies. The man dominated the face of 20th century music, but it seems like he’s making a stab at the 21st century, too!

Two of the greatest female pop vocalists - Celine Dion paying tribute to THE VOICE - Whitney Houston. These are the voices that make the music true music!

What favorite music have you carried along with you into the 21st century? Any new recording artists captured your ear?