"TAPS" is a musical piece sounded at dusk, and at funerals, particularly by the U.S. military. It is sounded during flag ceremonies and funerals, generally on bugle or trumpet, and often at Boy Scout, Girl Scout and Girl Guide meetings and camps. The tune is also sometimes known as "Butterfield's Lullaby", or by the first line of the lyric, "Day is Done". Source: en.wikipedia.org 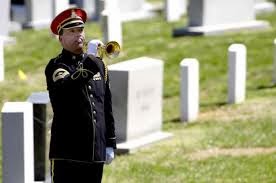 Hopefully you are aware of "Taps" but many of you may have never heard the version played in its entirety. "Taps" was originally written by Daniel Butterfield in 1801. It was rather lengthy and formal, as you will hear in the clip presented below. In 1862, it was shortened to 24 notes and re-named Taps.
Embrace the Past...

A few years ago, a friend visited the Netherlands American Cemetery and Memorial in the village of Margraten, about six miles from Maastricht. There lie buried 8,301 unidentified soldiers, among others, killed in the battles to liberate Holland in the fall and winter of 1944-45. Sgt. Bill Dukeman, 101st Airborne Division, 506th Parachute Infantry Regiment, Second Battalion, Company C (of "Band of Brothers fame) is buried there. He was killed in the battle of "The Crossroads" in northern Holland.

The Dutch hold an annual memorial concert every September at the above cemetery to remember and honor the Americans who died to free them in Operation Market Garden and subsequent efforts to eject the German army from Holland. Sgt. Dukeman, like many other fallen GIs, was "adopted" by a Dutch family. Dukeman's family in the States was contacted and hosted in Holland, and his grave site decorated each year by his Dutch "family." They keep his portrait in their home, displayed in a place of honor. Fathers pass this obligation down to their sons in Holland. This version of the original "taps" music is played by a 13 year old Dutch girl named Melissa Venema. The conductor of the orchestra is André Rieu from Holland .

Melissa Venema is playing "Taps" on a trumpet whereas the original was played on a bugle.


Watch this young lady's face while she's playing. This is no performance: it's an act of pure, unadulterated reverence. This is evidence of some of today's children being wise beyond their years on this planet. Be moved! Be blessed.