With Halloween just 11 days away, M&Ms will be among the many, many treats ready for delivery to little and big ghouls. For today, the M&Ms are not the candy but the connection of music and monsters. The song and artist in the spotlight on this day are very apropos. Among the many decorations and costumes of the holiday, one can anticipate the guttural breaths and rattling groans as creatures prepare for night fright. An essential component to Halloween is, of course, the music. Gearing up for Halloween engages finding just the right sound effects and scary music for the spookiest day of the year. 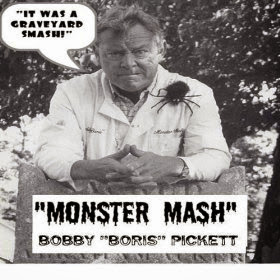 Bobby 'Boris' Pickett As a 9-yr old, 'Boris' watched a lot of horror films. Since his father was a theater manager this gave him an advantage of easy access to many films. In his nightclub routine, Pickett would do an impression of actor Boris Karloff, who played the monster in many Frankenstein movies. With the assistance of his friend Lenny Capizzi at the piano, the two came up with the plot about Frankenstein's monster starting a dance craze based on the dance of the times, the "Mashed Potato". 'Monster Mash' is arguably the most successful novelty song of all time. Bobby Pickett accomplished the rare feat of reaching the top 100 music chart 3 times with the same song.

The song has been used in several TV shows, including Cheers, The Simpsons and Happy Days. It's also been used in the movies Halloween III and Sweetheart's Dance. In 1995, Monster Mash: The Movie was released, starring Pickett as Dr. Frankenstein. 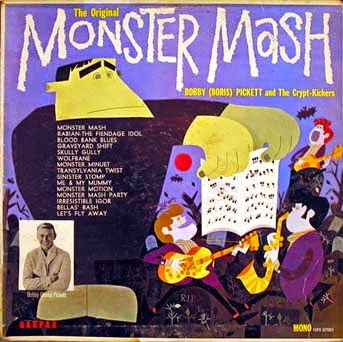 This being 1962, many of the sound effects had to be created in the studio. The effects on the song were done as follows:

*The coffin being opened was made by pulling a rusty nail out of a lump of wood with the claw of a hammer.
*The bubbling sounds came from blowing through a straw in a glass of water.
*The sounds of the chains was made by dropping chains onto plywood planks on the recording studio floor.


1962 Bobby 'Boris' Pickett and the Crypt Kickers started a two week run at No.1 on the US singles chart with 'Monster Mash', it became a No.3 in the UK eleven years later in 1973. The song had been banned by The BBC in the UK, deemed offensive.

And the music goes on beating to the rhythm of the changing times...
Posted by Unknown at 6:14 PM