The Ford Motor Company would not be where it is today had it not been for the inventiveness and sticktoitiveness of innovator Henry Ford. He had a dream driven by imagination. Being reared on and dutiful to the family farm, he was hesitant to stray very far but knew early on his passion was machinery and mechanics. Visiting town with his father enlightened Ford as a youth in the earliest technology of machines, engines and mills.

As a young boy, Ford took apart everything he got his hands on; he became known around the neighborhood for fixing people's watches. As he grew up, he explored every mechanical opportunity he could find, learning to fix steam engines and run mill operations. In the 1890s, he focused particularly on internal combustion engines. Source: Heritage

At the age of 25, Henry Ford had a promising career as an engineer at the Edison Illuminating Company, in Detroit, Michigan and fairly quickly climbed the ladder to greater financial security. At the same time, Ford had more time to devote and explore his own passions. He had a craving for knowledge of what made things work and how things could be made better. This led him to resigning his position as chief engineer at the Edison Illuminating Company's main plant on August 15, 1899. Concentration would now be solely on his automobile production. 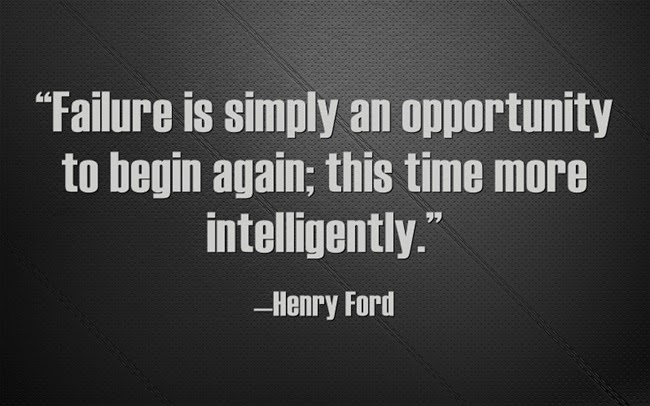 With any challenge comes the risk of failure. Life = Risk! Because of such a thirst, Ford's far-reaching vision never faltered in spite of first and second attempt failures. Henry Ford did not build the first automobile. He was responsible for the changes and transformations in the automobile into an innovation that profoundly shaped the 20th century.  And, it does not stop there. His insight continues to affect our lives today.

Next time you hit an obstacle in life, reflect upon the wisdom of Henry Ford. With failure comes the opportunity to try again, just differently!