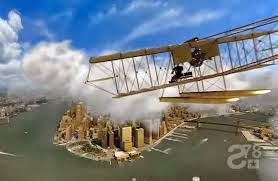 Encountering land after many weeks at sea embraced an enchanting site! The spirit of European exploration exalted its presence in the most significant landing in our nation’s founding: Jamestown, Virginia, 1607.

Seekers and adventurers
Left families, loved ones behind
Marking the end of one era
A new beginning for mankind

What was it they heartily sought
Across the raging perilous sea?
Was it peace and tranquility
Or simply a new life meant to be?

Ferocious winds, hostile seas
Crushed the hull and tore at the sails
With strength, determination
Safe passage did at last prevail

"Land ahoy!" echoed loudly
Along the horizon's thin line
The journey to the new world
Ended as hands firmly entwined

Ailing men, women, children
Lined the deck toward their utopia
"Look at such magnificence
The land of enchantment—America!”