Put Pork on Your Fork 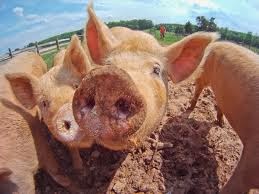 Pork. Tradition has it that pork should be the meat of choice on the first day of the new year. Hog jowl. Pig's feet. Chitterlin's. Ham hock. Pork sausage. Roast suckling pig. Pork dumplings. Notice I did not include bacon. Um-m-m? That is the most succulent pork ever. Well, it is actually in the list but hardly recognizable. Hog jowl. Really? You might question this if you know anything about different cuts of meat, in this case, pig.

Maybe I should explain the connection of hog jowl to bacon. First, what is jowl? According to Webster, jowl is

the lower part of a person's or animal's cheek, esp. when it is fleshy or drooping.

"she had a large nose and heavy jowls"
For purposes here, we will use the second part: the cheek of a pig used as meat. 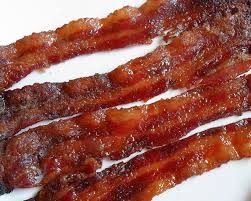 Second, bacon does not come from the cheek so why talk bacon when I mean jowl? It is not the cut but the taste which connects the jowl to bacon. The similarity is in the way the jowl is cooked and of course, its taste. Typically, the jowl is smoked and cured since it is a tough cut of meat. Then, it is used to season the beans, black-eyed peas, turnip greens, collards, etc. It can also be fried and eaten like thick bacon.

Now that you have a better understanding of jowl, let's talk pig vs. chicken, rootin' vs. scratchin'. There is an old saying about pig rootin' that overshadows chicken scratchin' thereby making pork dishes the better choice over chicken on this day anyway. That is to say chicken of any kind: casseroled, crocked, crusted, baked, BBQed, boiled, braised, broiled, fingered, fricasseed, fried, grilled, nuggeted, pied, roasted, rotisseried, rubbed, saladed, sandwiched, sauced, sauteed, seared, stir-fried, stuffed. Need I say more? Of course, the scratchin' also leaves the turkey off the table for New Year's Day. Okay, all you turkey lovers, the leftover turkey from Christmas will just have to wait until another day. Sorry.

Stepping back in time to the German immigrants finds a German custom that puts the pig first leaving the chicken (or turkey) for a another day. In America, this custom prevails in the Pennsylvania Dutch tradition. We must also keep in mind that the lowly cabbage earns its star on center stage along with the pig [remain focused on German]. We'll get to that in a moment. Let's get back to the pig rootin' instead of scratchin'. 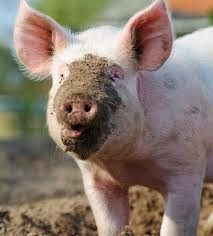 It is actually quite simple. The pig uses its snout to root in a forward direction. The chicken, as well as the turkey, uses its feet and scratches backwards. Do you see where this is going? A pig can't turn its head to look back without turning completing around. It doesn't take much thought to understand why it is believed pigs are always looking to the future. [Of course, a pig's future is not very idealistic. I digress.] Anyway, this is a perfect fit with the New Year's celebrations since lore dictates moving forward as a sign of progress. Better to move forward in the New Year, rather than backward.

Now, what about the cabbage? Those leftover collard greens look pretty good to me. However, cabbage is an excellent compliment for pork. The two just go together, especially when the cabbage is made into sauerkraut. See...German! It has been documented (somewhere in history) that eating sauerkraut actually results in a 'sweet' year, sweetness meaning good luck.

Empower the Present to Enrich the Future...

Put pork on your fork today! Load it up so to speak. You do want to have a prosperous New Year. Right? Keep in mind that pigs (hogs, too) have long been symbols of prosperity and gluttony. It is a common saying to refer to persons as "being a pig" or "pigging out," which means they are taking more than their share, often leaving little to none for someone else. It is even believed in some customs that the bigger pig you eat on New Year's, the more stuffed (with $$$) your wallet will become in the coming year. Seems that implies the "fatter" the pig, the "fatter" the wallet.

What is truly interesting is that in the South and poor regions of the country, pigs are considered symbolic of health and wealth. Especially back in history, families could smoke or cure a pig and eat on fatty meat of that one pig for the entire winter. In some cases, having fatty pork on hand could mean the difference in life or death in an extremely cold winter. I dare say fatty pork is not included on the menu of today's 'healthy' diet!

What's on your menu today? There will be many variances in different parts of the world because of the diversity in customs, traditions and availability of foods. In the South, this is a typical lucky New Year's Southern Supper... 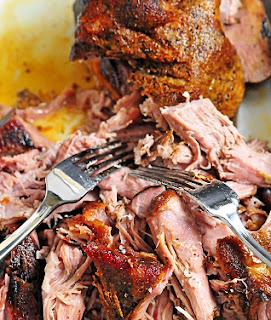 
Go to Awakenings' sister site, catnipoflife, for a visit with the little piggies. It just might change your mind about putting pork on your fork!