MAY THE FOURTH BE WITH YOU!

I was immediately drawn to the title of a post by Alastair today since it was a pun on the Star Wars' line 'May the Force be with you!" I smiled and reflected for a moment on my encounter with the first Star Wars movie in 1977. Little was it known at the time that Star Wars would become a legend, an icon, practically a household word. The smiles on camera were just the beginning of a movie phenomenon! 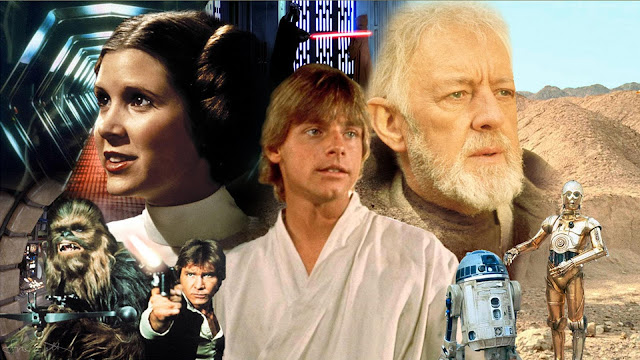 I have never been part of the Star Wars obsession so that is why this post was not posted earlier in the day. It is here now for those of you who have followed the phenomenon from its inception to present day. Interestingly enough is the manner in which the famous line 'May the force be with you' was misinterpreted in 2005 as "On May 4th we are with you." This led to the first organized celebration of Star Wars Day on May 4, 2011 in Toronto, Ontario, Canada.

So, what does one do on Star Wars Day: just about anything one can think of relative to a character or event in the movie. The saga lives on as afternoons are filled with trivia and movie marathons. From music to light sabers to themed food to logo plastered dining wear to costumes of favorite characters, partying continues well into the night.

May the Fourth be with you always!

Who was/is your favorite character and/or episode?

May the Fourth be with you, and also these great 'Star Wars' parodies
http://www.today.com/entertainment/may-fourth-be-you-also-these-great-star-wars-parodies-6C9682723