In the summer of 1893, Brad's Drink hit the market! Brad's Drink? What on earth is Brad's Drink? Can't be a drink named after Brad Pitt, he was born 70 years later. Let's see...who by the name of Brad was influential in the year 1893?

That person, of course, would not have a first name of Brad at all. The noteworthy person in this instance is Caleb Bradham from Bern, North Carolina. "Brad's Drink" was the most popular beverage Caleb served at his drugstore where he had a soda fountain.  It was made of carbonated water, sugar, vanilla, rare oils, pepsin and cola nuts. Pepsin? Um-m-m-m? Doesn't that have something to do with digestion? Was this to be another beverage for 'medicinal' purposes? In actuality, Bradham sought to create a fountain drink that was delicious which would aid in digestion and boost energy.

While "Brad's Drink"was a hit, the name underwent change. The first Pepsi Cola name appeared in 1898: Pepsi after the ingredient pepsin and Cola from the cola nuts. The name Pepsi-Cola was trademarked in 1903. The name was shortened to Pepsi in 1961 remaining the same into the 21st century but the logo has passed through many stages of evolution being tweaked and revamped while still maintaining the American image of red, white and blue. 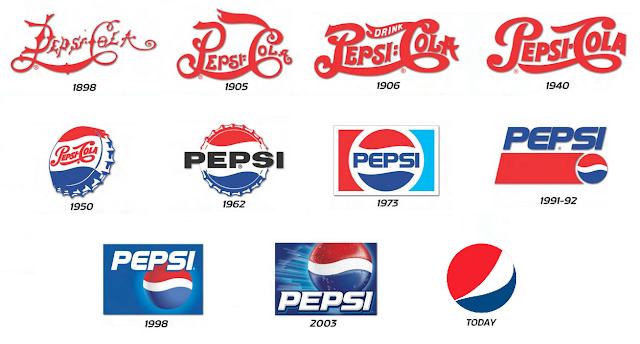 When the sugar market crashed as a result of World War I, Pepsi-Cola declared bankruptcy in 1923.  Still concerned with people’s health, Bradham returned to his drug store in New Bern as a full-time druggist. In 1931, Pepsi Cola was bought by the Loft Company president, Charles G. Guth who reformulated the popular soft drink. Guth struggled  to make a success of Pepsi. He even offered to sell Pepsi to the Coca- Cola company who refused to offer a bid. In fact, on three separate occasions between 1922 and 1933, The Coca-Cola Company was offered the opportunity to purchase the Pepsi-Cola company. It declined on each occasion.

From the 1930s through the late 1950s, "Pepsi-Cola Hits The Spot" was the most commonly used slogan in the days of old radio, classic motion pictures, and later television. Its jingle (conceived in the days when Pepsi cost only five cents) was used in many different forms with different lyrics. With the rise of radio, Pepsi utilized the services of a young, up-and-coming actress named Polly Bergen to promote products, oftentimes lending her singing talents to the classic "...Hits The Spot" jingle.
[Source: http://en.wikipedia.org/] 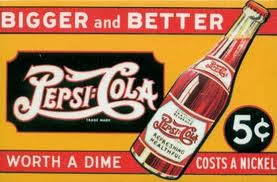