There is just nothing like the good ol' Westerns! Not only did you get to watch the Saturday afternoon movie matinee but afterward you got to go home and play the part until dark. The horses were Dad's saw horses out back in his workshop and the six-shooters were perfectly formed broken pecan tree branches. A single ground-sweeping branch from the Weeping Willow served as the snapping whip as sounds of yippee ki-yay echoed through the entire neighborhood. Of course, it was more like repeated 'yippees' but I am sure you get the picture. 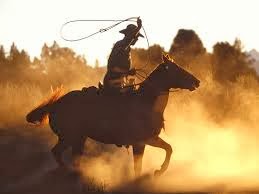 Yippee-ki-yay became an abbreviated version of yippee yi yo kayah but where did the phrase originate and how is it connected to the cowboy?

Did the range hands ride the fences rounding up horses and heads of cattle, lassoing them for branding as each cowboy yelped yippee yi yo kayah the livelong day? Could be. That is completely debatable!

As far back as the 15th century the yip part of yippee originated. Now that's old...really OLD! Its meaning related to the chirping sound of a young bird (Oxford English Dictionary (OED). The more well-known version of its meaning was established in 1907: A sharp, high-pitched bark; a yelp.

As for the yip extension into the word yippee, this came later with its earliest recording being in 1920. A look into Sinclair Lewis's novel, Main Street finds this reference: "She galloped down a block and as she jumped from a curb across a welter of slush, she gave a student 'Yippee!'"

Now how about the whole phrase, yippee-ki-yay? It seems to be a play on "yippie yi yo kayah," a refrain from a 1930s Bing Crosby song, "I'm An Old Cowhand." Thus, the cowboy connection. . .


Did cowboys really use this expression? A good question. What do you think?