Are you READY for one of America's quirkiest holidays, Groundhog Day? Groundhog? Do you mean woodchuck, whistle-pig, or land-beaver? No? You say a groundhog forecast the weather? What kind of folklore is that? Um-m-m-m-m? Let's look a little deeper into this weather hound.

The groundhog phenomenon traverses centuries of time shrouded in myths and legends centered around cultures and animals. This predictable tradition stems from European beliefs associated with Candlemas Day and the days of early Christmas. The Roman legions supposedly brought it to the Teutons, or Germans. They concluded that if the sun made an appearance on Candlemas Day, an animal, the hedgehog, would cast a shadow, thus predicting six more weeks of bad weather. Some would say this was interpolated as the length of the "Second Winter."

So, here we are in the 21st century, having just received iconic news from a groundhog! Br'er Groundhog has decided the fate of winter. Today, February 2nd at 7:20 AM EST, Punxsutawney Phil was pulled out of his 'lair' at Gobblers Knob, Pennsylvania. 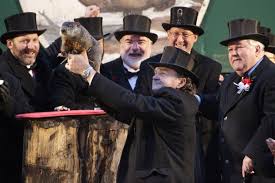 Okay, Punxsutawney Phil, since this is your 127th prognostication for the fate of winter,


"Thank you for an early spring!!" 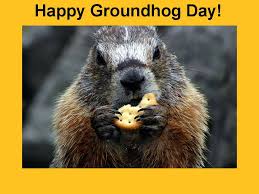