With Halloween approaching, stories of ghosts, goblins and ghouls monopolize the setting as the movie makers try to outdo one another with scenes of blood and gore. I often wonder how many bottles of ketchup (or similar fake blood) are wasted as Dracula feeds upon his victims, the Werewolf mauls his prey beyond recognition or Freddy Krueger uses a glove armed with razors to kill his victims in their dreams. We scream at the sight of bizarre transformations and close our eyes as flesh melts away like candle wax exposing the skeleton underneath. Then, as if that's not enough, the Zomies right out of the grave thrash about uncontrollably with gutteral breaths and rattling groans.

Of course, all horror movies do not necessarily feed upon blood and some actually bring about laughter, rather than shrills and chills. Among the best is the good old-fashioned black and white classsic Young Frankenstein staring Gene Wilder and directed by comic genius Mel Brooks. Peter Boyle portrays The Monster whose heart is soft while his appearance is grotesque. Then, there is comedy legend Marty Feldman playing Igor, or is it Egor (?), who embraces movie lines that become as natural as speech itself.

The film is an affectionate parody of the classical horror film genre, in particular the various film adaptations of Mary Shelley's novel Frankenstein produced by Universal in the 1930s (Wikipedia).


Black-and-white horror movies: Our parents and grandparents grew up on them, and now Tim Burton's gleefully gruesome Frankenweenie will ensure they resonate for another generation. Read MORE at Hollywood's Horror History — For Kids

A Step Back in Time

Halloween was always a fun time for us and of course, the kids. We carved pumpkins, baked cookies and definitely had plenty of candy on hand for the 'trick or treaters'. The house was decorated with cobwebs and the music of the day resonated morbid tunes as though played by the devil himself. Chains rattled, candles glowed and the eerie atmosphere ran chills up the spine. Daddy was the monster with the most hideous mask, I was Elvira, the Vamp, and the kids were little ghouls. For the kids costumes, I took old pillow cases, dyed them grey, cut holes for the neck and arms and slipped one over each kid's head. Hair was teased and mussed with just the right touch of blood painted on lips and faces with Sizzlin' Red lipstick.

One story always at the top of the list is the Halloween Daddy hid behind the bushes. The kids and I were on the front porch. A mother approached with a small child, a little boy about 3-4 years old. Daddy stepped from the shadows into the glow of the streetlight and rattled the chain he was carrying. The little boy screamed, wet his pants and the mom proceeded to cuss Daddy out for being so mean. Duh! It was Halloween! 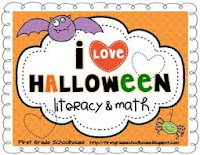 The second to the top is the time Daddy and Scott road around town in full Halloween gear getting ready for the night ahead. I was still teaching at the time so they decided to surprise me at school. It was the end of the school day. I was at my desk going through papers when suddenly appeared these two 'clowns', not in the sense of the circus clown mind you. However, their antics did remind me of someone right out of a circus. Daddy decided to stand at the door in case some students were still around. He heard someone coming down the hall so he steathily slipped back just inside the classroom. It was Tanisha stopping by for help with math homework. Needless to say, she never made it into the room. Daddy jumped out and met her square in the face! She screamed, wet her pants and ran like her life depended upon it! Reminds you of the little boy, doesn't it? Only this time it was a girl and she was in the 8th grade. 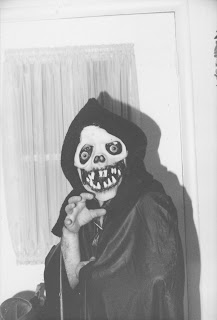 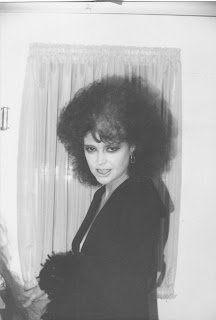 On the very left in Nicole's picture is a glimpse of April's hair. Don't know what happened to her picture nor that of Wendy. There was also one of us all together on the front porch but it was not to be found in the picture album. Back in that time we did not have a digital camera so all of the photos were Kodak prints.

A Bit of Nostalgia
﻿
What are your fondest memories of Halloween - laughter or shivers?
Who did you profess to be?