A dark day in our history succombed to a series of deadly terrorist attacks striking the areas of New York City and Washington, D.C. on September 11, 2001. The destruction of the Twin Towers caused serious damage to the economy of Lower Manhattan and had a significant impact on global markets.
﻿﻿

What started across the sea now struck home
at the heart, mind, and soul of America.
A beautiful day under clear, sunny skies
unfolded a threat of terror's reality in darkness.
A lifeless cloud descended
Upon a splendid city
Raining hatred and terror
Without regard or pity

There were those who survived
Needing the greatest of care
To understand, carry on
Through hope and endless prayer

That dismal, dark day in history
Brought about a stark reality
America is vulnerable
Amidst gracious hospitality

Connecting the past to the present…
“The attacks of September 11 were intended to break our spirit.
Instead we have emerged stronger and more unified…
We are more determined than ever to live our lives in freedom.”
—Mayor Rudolph “Rudy” Giuliani, New York City (in office 1994–2001)

We Shall Never Forget (9-11 Tribute)
by Alan W Jankowski · Sept 30, 2010
Oh, could say a few things about this one...it's been in print at least 15 times that I'm aware of, and probably far more...and was used in more 9/11 ceremonies this past tenth anniversary than I will ever know...the stuff with the school kids, scout troupes and the like is always touching...made a list actually of some places it appeared... Click HERE!

Yeah, this one got pretty big...and it's only the first year... 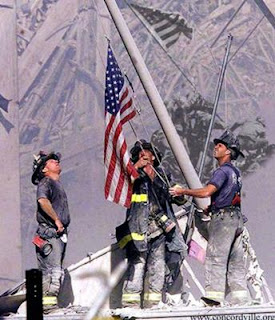 We Shall Never Forget...
Let the world always remember,
That fateful day in September,
And the ones who answered duty's call,
Should be remembered by us all.

Who left the comfort of their home,
To face perils as yet unknown,
An embodiment of goodness on a day,
When men's hearts had gone astray.

Sons and daughters like me and you,
Who never questioned what they had to do,
Who by example, were a source of hope,
And strength to others who could not cope.

Men who bravely gave their lives,
Whose orphaned kids and widowed wives,
Can proudly look back on their dad,
Who gave this country all they had.

Actions taken without regret,
Heroisms we shall never forget,
The ones who paid the ultimate price,
Let's never forget their sacrifice.

And never forget the ones no longer here,
Who fought for the freedoms we all hold dear,
And may their memory never wane,
Lest their sacrifices be in vain.
©2010
Alan W. Jankowski
Where were you when terror struck
at the heart of our nation?