As an educational consultant, I am fortunate to work with educators that span classrooms from kindergarten to senior high. I received a video package from a teacher as part of her requirements toward the obtainment of Florida's reading endorsement. From the onset of the instruction, I was in awe! She was teaching the very essence of my post, Stitches in Time, with enthusiasm beyond measure. It was so obvious teaching is her passion and she had her elementary school students mesmerized. The class was from 25 to 30 fourth grade students all actively engaged in the learning process. 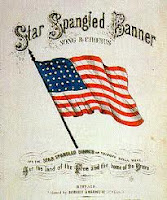 The focus of the instruction was vocabulary and reading comprehension. The text: The Star Spangled Banner. As this teacher gathered prior knowledge from her students, reflections were made on an earlier lesson centering around the Pledge of Allegiance. Students reported that saying the pledge since they studied it line-by-line now carried new meaning way beyond that of its past daily recitation.

That was just the beginning. . .

Just prior to delving into the words of The Star Spangled Banner, a question arose about its becoming America's national anthem. This led to open discussion about The Star Spangled Banner first being a poem, then a patriotic song. Remember, this is a vocabulary and reading comprehension lesson. Therefore, the first two words discussed included the following:

Anthem: A song officially adopted by a country as an expression of national identity.
Patriot: One who loves, supports, and defends one's country.


It is from the uncovering of these terms that the following outcome took me totally by surprise. A question/answer discussion took place as events were being recalled which led up to the penning of The Star Spangled Banner by Frances Scott Key. In 1814, Key was inspired by the American victory and the sight of the large American flag flying triumphantly above Fort McHenry, Maryland.
And the discussion kept going. . .
As you read the questions presented during the discussion, keep in mind that these were being posed to a class of fourth graders. What is your response to each question asked? See if your thoughts match those of the elementary students.

Question: Why would you say yes?
Responses: Back then they got away from England because of taxes. They became free and glad to be their own people (pause) with independence. Now that time has passed we are used to being free.

Question: So, today we expect it, instead of appreciate it?
Responses: Overwhelmingly the response was "yes" from the students.

Share Your Thoughts
Did your thoughts coincide with the responses from the fourth graders? Were you surprised at the outcome? Is that true of America today? Are her freedoms, liberty and justice simply being taken for granted, totally expected, but not truly appreciated with consideration of the sacrifices made by our forefathers?

Give it some thought, serious thought. Then, say it/sing it for America in appreciation for all her struggles — lives crippled and lost, battles fought and won!

And that needs to continue. . .

Share your thoughts in the comments box. Send this link to your family members, close friends, coworkers and acquaintances. It would be great to "say it/sing it forward" all across America, as well as overseas where so many of our men and women are serving our country in the military!